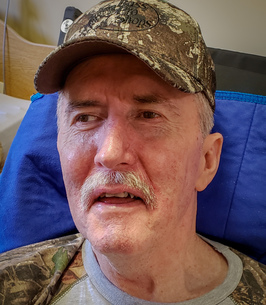 Share this tribute
Memorial Candles Lit for Alan | SEE ALL
Light a Candle
"We are honored to provide this Book of Memories to the family."
— Weeks Family Funeral Home & Crematory
"Alan was a wonderful Husband, Father, Grandfather and Friend. Mine and Pat's thoughts and prayers are with all of you. We light this candle..."
— Ann and Patrick Bell
"Sorry for your loss. Our thoughts and prayers are with you."
— Patsy and Patty McDaniel
Funeral Details Memory Wall Photos & Videos Send Flowers

Print
Alan Eugene Sherrill, 60, died peacefully November 10, 2018 at Pioneer Manor in Hugoton, Ks. He was born October 23, 1958 in Dumas, Tx to Douglas “Dude” Sherrill and Betty (Stevens) Sherrill.
Alan was raised in the Oklahoma panhandle and graduated from Guymon High School. On June 29th 1979 he married Tammie Dawn (Cooper) and they settled in Tyrone, OK where they raised their two sons, Ryan Alan Sherrill and Tyler Randle Sherrill. Alan worked as a mechanic in both the automotive and gas and oil industries. He served many years on the Tyrone Volunteer Fire Department and served as Fire Chief for a time during that tenure. Alan was diagnosed with early onset Parkinson’s disease in 1991 at the age of 32 and suffered from this debilitating disease until the time of his death. Although this disease eventually left him unable to perform many physical tasks, Alan’s amicable personality and passion for all that he held dear always remained evident to all who knew him. Alan was a devoted husband and father and enjoyed taking Tammie, Ryan and Tyler on hunting and fishing expeditions. He was also a doting grandpa who loved just being in the presence of his grandsons Camden and Carter Sherrill. He was an avid Nascar fan, cycling enthusiast, and an amateur weather watcher. Alan was very mechanically inclined and could fix most anything that needed fixing. He was a beloved son, brother and friend and will be missed by many.
Alan is survived by his wife Tammie of Tyrone; son Ryan and wife Lindsay of Fort Collins, CO and son Tyler of Fort Collins, CO; grandsons (sons of Ryan and Lindsay) Camden and Carter; mother Betty Sherrill of Guymon, OK; two sisters Karri Long and husband Steve of Guymon, OK and Jana Larson and husband Brett of Fate, TX; brother Steve Sherrill of Guymon, OK ; parents-in-law Jack and Glennetta Cooper of Tyrone, OK; two sisters-in-law Beth Shilling and husband Jerry of Kingfisher, OK and Jackie Stevens and husband Lloyd of Tyrone, OK; as well as many aunts, uncles, cousins, nieces and nephews. He is preceded in death by his father Dude Sherrill.
A memorial service will be held Tuesday, November 13, at 1:00 p.m. at Tyrone Church of Christ.
Memorial donations in memory of Alan may be made to the Michael J. Fox Foundation for Parkinson’s Research at https://www.michaeljfox.org

To send flowers to the family of Alan Eugene Sherrill, please visit our Heartfelt Sympathies Store.

We encourage you to share any memorable photos or stories about Alan. All tributes placed on and purchased through this memorial website will remain on in perpetuity for future generations.

With fond memories of Allen, from Guymon High School Class Of 1977.
Monday November 19, 2018 via Heartfelt Sympathies
Share This:

GB
My deepest sympathies and prayer thoughts go out to each member of Tammy's and the extended families of the Sherrill's. Alan was one of the most thoughtful and caring people that I ever had been around. He was very proud of his family and the two fine young men that he brought into this world. I fondly remember some of our archery hunting experiences that we shared years ago, in fact I still have a hunting knife that he and Dude made for me. Alan indeed was instilled with an excellent up bringing from his dad Dude and was definitely a chip off of the old block. I'm proud to have known Alan and he will be greatly missed by many people.
Greg
Greg Beauchamp - Tuesday November 13, 2018 via Condolence Message
Share This:

BS
Tammie and family, we are so sorry for your loss. Much love to you all,
Beth and Scott Smith
Beth Smith - Tuesday November 13, 2018 via Condolence Message
Share This:

Alan was a wonderful Husband, Father, Grandfather and Friend. Mine and Pat's thoughts and prayers are with all of you. We light this candle for the life of a Man who was greatly loved and will be deeply missed
Ann and Patrick Bell - Monday November 12, 2018 via Memorial Candle
Share This:

Sorry for your loss. Our thoughts and prayers are with you.
Patsy and Patty McDaniel - Sunday November 11, 2018 via Memorial Candle
Share This:

DT
Karri & Families ~ I’m so very sorry about the loss of your dear loved one. I did not know him, but God truly knew him. He sounded like a wonderful man. Thinking of all of you with love & sincere condolences.
Dana Tomlinson
Dana Tomlinson - Sunday November 11, 2018 via Condolence Message
Share This:
1
Page 1 of 1
Share
×

Share on Facebook
Send flowers to the family
Choose from beautiful standing, table and basket arrangements. Safe and secure online ordering.
View Flower Arrangements
What has already been purchased for the family?
Plant a Tree in Memory of Your Loved One
An Honouring a Life memorial tree is a unique tribute which provides global benefits like no other memorial gift could.
Plant a Tree
Family Log-In