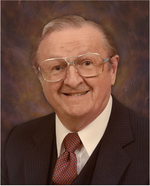 GARDEN CITY - Darold “Pete” Vanderhoff, of Garden City, KS, died on Monday Oct. 3 at Homestead Health and Rehabilitation. He was born on March 8, 1924, in Alta, Iowa to George and Anna Kluge Vanderhoff.

Darold served in the US Army in Yakima, WA and El Paso, TX.

Darold was a technical illustrator/writer and artist, and worked at major aircraft corporations around the US, including Atlanta, Orlando, St. Louis, Dallas, and Ft. Collins, CO.

He was also a craftsman, building toys, furniture, and decorative items, along with landscape painting.  An avid reader, Darold had a large collection of resource books which he took great pleasure in reading.
He continued working at Sears until the age of 85.

To send flowers to the family or plant a tree in memory of Darold George "Pete" Vanderhoff, please visit our Heartfelt Sympathies Store.