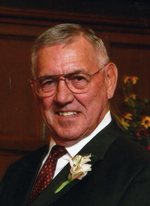 In 1937 the family moved to Haskell County to a farm near Santa Fe where he attended grade school. Gene later attended school in Sublette graduating SHS in 1950.

In January 1951, Gene went to Kansas City to join the Navy. He served aboard the USS Collett in Japan and Korea being honorably discharged as a BT first class.

He later married Terri Stevens and she survives of the home.

Gene believed in serving his country and he served his local community in several ways. He was on the County Extension Board, Cemetery Board, USD #374 School Board for eight years, Haskell County Commissioner for 16 years and was appointed as Commissioner on the Haskell County Historical Society Board. He was a member of the American Legion for 61 years, Masonic Lodge, Midian Shrine and Scottish Rite.

Visitation will be 1:00-6:00pm Monday, February 19 at the Weeks Family Funeral Home.

Funeral Service will be 2pm Tuesday, February 20, 2018 at the Sublette Church of the Nazarene with Rev. Dr. William R. Thomas presiding. Burial at the Haskell County Cemetery following the service.

In lieu of flowers, suggested memorials contributions are to the Sublette Church of the Nazarene, Emmaus House of Garden City or the Haskell County Historical Society and Museum in care of Weeks Family Funeral Home & Crematory, PO Box 1200, Sublette, Ks 67877. Condolences may be left online at WeeksFamilyFuneralHome.com