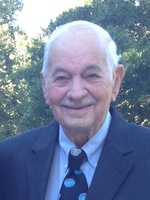 Frank Leonard McDaniel, age 90 formally of Garden City, Kansas, entered the heavenly gates surrounded by family on Tuesday, December 29, 2015, at his home in Tulsa, Oklahoma. Frank was born to Leonard and Emma McDaniel on January 28, 1925, in Seguin, Texas. He had three sisters, now all deceased. He is survived by his wife Nita Mae Giles McDaniel; one son, Frank McDaniel, Jr. of San Antonio, Texas; one daughter, Hedi Olivia McDaniel (deceased), and two stepsons and one step-daughter: Richard Birney of Fishkill, New York; Larry Birney of Ada, Oklahoma; and Linda Helm of Tulsa, Oklahoma.

Frank served in the South Pacific in World War II and was a long-time member of the Garden City Gun Club, and attended Plymell Community Church before moving to Tulsa in 2011. Frank was blessed and will be missed by many grandchildren, great grandchildren, relatives and close friends.

Visitation for Frank will be at the Weeks Family Funeral Home in Sublette from 6 to 8 pm on Sunday, January 3, 2016. Funeral Services will held at Plymell Community Church on Monday, January 4, 2016, at 10 am with interment following at Haskell County Cemetery.

To send flowers to the family of Frank Leonard McDaniel, please visit our Heartfelt Sympathies Store.